Who E ran with:

How far did E go?

What did E wear:

We started two-thirds of the way up The Long Walk in Windsor with the infamous castle behind us. Once the gun released us all we headed up The Long Walk and turned left once we reached the copper statue of George III on a horse, before setting off into Windsor Great Park. The half marathon route consisted of two loops in the park. The first loop was pretty short heading south-east towards the Cow Pond, then west to Gravel Hill, a tight right-hand switchback at Prince Christian Plantation and then a left-handed one taking you up to Alberts Plantation and Poets Lawn. Finally, two right-handed corners around The Village before you loop back past the statue of George again and head out on loop two. This loop is much larger but starts the same continuing south at Cow Pond all the way down to Virginia Water and via Breakheart Hill. The route then curves back north running alongside Long Plantation and up to Princess Beatrice and Norfolk Plantations. Once you reach Dark Wood there is a sharp left corner taking you to rejoin lap one. Once you get back to the Statue of George it is now time to turn left and hope that your legs carry you the long straight to the finish line. Beware, the finish is further than you think so don’t set off too eagerly!

Being on completely closed roads in the park. It was also really cool to retrace some of the Redbull Timelaps loops that we cycled for 25hours!

The finish straight is a tough one because visually it is just there, but it is actually still a mile away! We had a lot of people come steaming past us only to blow up a little down the road and have to jog to the line.

It is on the doorstep of Royalty. We say make a weekend of it and explore Windsor as it is such a stunning and historic town.

Jo Pavey! a five-time Olympian, having represented Team GB at every Olympic Games from 2000 to 2016.

In 2014, she won the 10,000m gold medal at the European Championships in Zürich, just ten months after giving birth to her second child, to become the oldest female European champion in history at the age of 40 years and 325 days.

Why don’t I actually just stop and go for a wee instead of being uncomfortable the whole way round? Numpty!

Few sips of water and a margarita Clif blok

Saucony as they very kindly gave both E and Rob their spaces for the race. Also E’s mum and sister who had a nightmare with finding the start and so ending up sprinting up The Long Walk to catch E and Rob at the finish.

If you Fancy a Go… 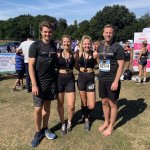 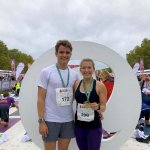