Who we ran with:

How far did we go?

What did we wear:

The start line was in the south-east corner of Wimbledon Common. We headed out West on a path parallel to The Causeway and turned right up West Place at the end, where there was a huge deep puddle that a lot of runners refused to run through which caused a bit of a backlog. We decided that staying clean was not really an option so we splashed through the puddle and then turned left onto the common to run alongside Sunset Road. There was then a sharp right-hand corner on the Windmill Ride trail which we followed all the way through until we turned right at a T junction onto Windmill Road. This short section was on the pavement and so mud-free. When we reached another T junction it was time to hit the trail again and run alongside Parkside (aka A219) in the trees, which was gorgeous, albeit quite slippery! This path came out near the start line at which point there was a 1km ish triangular loop to run before heading back out for lap 2.

The giant puddles! Great fun to just stomp straight through the middle when everyone is trying to tiptoe around the edge.

We also loved that Matt was still in the loo when the race started and still managed to come 2nd.

The narrow start. You want to make sure that you are in the correct part of the starting pen otherwise you could have a slow start or equally feel like you are in a stampede!

It’s hosted by RunThrough so it’s always going to be fab. Wimbledon Common is stunning and really makes you feel like you have escaped the city.

Lots of the We Are Runners crew and Jordan (@projectmarathongirl) lead the warm-up.

Just run through the puddles!

No food or water during the run as it was only 10km. We then made a beeline for a RunThrough flapjack post-run, plus the festive mince pies on offer.

Rob, Josh and Adam for carrying everyone’s coats while we ran.

If you Fancy a Go… 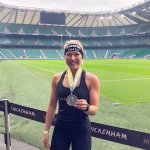 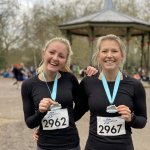