There was a time when newspaper feature writers and magazine columnists were the ‘A’ listers of print. Now, there is no need to visit a news stand, just open up your lap top. Bloggers are the new opinion shapers. On line writers are on message and instantly accessible. They have no deadlines and no price tag. You just log on and let them entertain and inform you. Beauty, lifestyle, fashion, fitness… every subject is covered by an internet community full of passion and insight for their chosen specialist subjects. For us in the fitness world, our blogging heroes are those true to their principles of health. No fad diets or magic pills necessary. And who is leading this revolution? Kayla Itsines, that’s who!… Women’s Health first ever fitness blogger cover.

Kayla only began her journey two years ago with the release of her E-Book ‘The Bikini Body Guide’. The Queen of Fitness has since racked up a following of more than 4 million, each a loyal member of #KaylasArmy. Since release of the guide, Kayla has toured the country sharing her strength secret with thousands of individuals dedicated to health and bettering their bodies Women’s Health Editor Katie Mulloy says: “We’ve featured everyone from the Hollywood A-list to the best of British talent on WH but when it came to choosing a cover star who we knew could inspire our readers to kickstart their New Year fitness, I couldn’t think of a better celebrity than Kayla. She’s the undisputed Queen of Fitspo, followed by millions and has helped women all over the world achieve the sort of results WH prides itself on. I’m proud that WH is the first magazine to work with Kayla on a solo cover and I’m thrilled that we’re kicking off 2016 with such a happy, healthy and positive message.”

Some of our favourite Kayla quotes…

ON THE CONTROVERSY AROUND ‘BIKINI BODIES:

“When I first started, I talked to my clients, I asked what they wanted to feel like. So, not what they wanted to look like, but what they wanted to feel like, and they said, ‘I wanna feel good in a bikini’. So when I did the guide I called it the Bikini Body Guide, thinking that a bikini body is just when you feel comfortable in a bikini. I never meant to convey an idea of a certain body type. I didn’t mean it like that. So now that app is called Sweat with Kayla. Which is basically what you do. You don’t have to look a certain way or be a certain way. As long as you’re sweating and you feel good, that’s great. I’m happy about that. I feel more comfortable about it.”

ON HER GLOBAL TOUR:

“London Olympia was the best. I was behind these glass doors so I hadn’t seen them yet and then I went through and the noise was incredible. I had to try not to cry.”

‘The full interview appears in the Jan/Feb issue of Women’s Health, on sale 10th December. 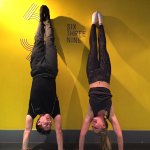 Culprits of the Crunch, and over to ‘Coach Dom’Blogs, Training 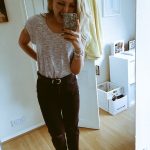 To Bettering and Not BatteringBlogs, Lifestyle, Training