Now, let’s be honest. Yoga is not everyone’s idea of the best way to sit down and relax. Give many people the choice between winding down in the Lotus position or behind the wheel of a Lotus sports car and they’d snatch the keys from your hand before you could say ‘Zen’. They wouldn’t need to meditate on that decision for long! Yoga is an acquired taste and worthy words like ‘form’ and ‘focus’ can be enough to send the uninitiated into beating a hasty retreat rather than persuading them to book into a Yoga Retreat, even with the masterminds behind TURASÓIR! But, hey we have a message for you… don’t be so frightened of yoga.

A confession. When we first heard about Erin Lewis’s Form and Focus yoga retreat, the first words that really caught our attention were ‘yoga and wine’… and just maybe a measure or two more of the latter than the former. It’s a pain and gain thing, right? However dubious we may have been about the true bliss to be found during a contemplative morning spent saluting the sun, we knew as a matter of fact that an evening spent watching it set with a chilled bottle of Pinot Grigio is our version of paradise. Listen, we are running girls. We like to clock up a few sweaty kilometres in order to balance out our guilty pleasures. We are not going to deserve a treat after an hour of gentle Sarvangasana and Halasana, are we? Wrong!

Wine was the least of the delicious pleasures on offer during our visit to the EAT.PRAY.MOVE. Retreat in the Chianti region of Italy. Among the many surprises, we found on this Tuscan adventure was how quickly we felt at home with the different pace and vibe of a break based on this physical, mental and spiritual exercise that has been practiced in India for centuries and centuries. Yoga followers are not a closed community. Yoga is an open door to so much more… and we walked straight through it.

The Form and Focus retreats that Erin and Julian Hyzler have devised look to combine yoga and art in order to present a new look into the notion of a mindful holiday. Each day, we took part in a yoga and meditation class but none of them were compulsory. This is not a boot camp for the soul. Erin is quick to stress that if you want to visit one of their havens with a non-participating partner that is absolutely fine. The classes are tailored to all levels of yogis and are small enough to allow for personal attention and guidance. They differed in style and focus, gradually introducing us to a host of new flows and variations. On idyllic blue sky mornings, we headed to the garden to watch the sun come up as we dedicated our practice to its warming presence. For the evening sessions, we adjourned to the gorgeously chic surroundings of the studio. As a space it was a delight for the senses, decorated by
Julian’s striking artwork and infused by Erin’s heady incense selections.

During the hours either side of lunch, we relaxed by proudly filling our journals with the new skills we had learned. Just as with yoga, art in any form is a foreign body to us. We wouldn’t know a Van Gogh from a Matisse and so we were unsure if we were going to pick any of it up quickly enough to enjoy. Julian had other ideas, though. His passion, encouragement, and talent won us over in no time and before long we were spending our ‘free time’ trying to draw some of the famous buildings of Florence.

We are two people that spend minutes, hours, days and months desperately digging into the creative sections of our brains for ideas and initiatives to continue building the brand that we are so proud of, and this was a chance to really challenge that creativity way outside of its comfort zone. As with physical exercise, the greatest gains come from breaking through boundaries into new and previously uncharted
territory and stretching your perceived limits. Sketching sure did that!

This was definitely an experience that took us into all kinds of undiscovered areas. True to Erin’s company name, she made sure that we explored form and focus in a wide variety of ways, beginning with the focus we found in our own company. We know that we are so lucky to be surrounded by a crew of like-minded people, all deeply passionate about the work we do, the industry we are in and the opportunity to spend each morning challenging our heart-rate at London’s finest sweat studios. It
is easy to distance ourselves from the rest of the population that don’t share our desire to build better, stronger bodies. It does us good to remember that there is actually life outside the gym. And EPM was miles outside the gym!

Our week in Tuscany introduced us to some very different people, but with the same love of laughter, debate, life values and lasting happiness as us. They may have had much different interests, hobbies, views, and routines but they carried them with the same passion we have for our active lives at home. We all need to take a step back from our lifestyles occasionally to assess them and how they impact on us and those around us. By forcing us outside of our usual friendship group into a gathering of others seeking refreshment and enlightenment it really opened our eyes as well as our pores! We left inspired by the diverse attitudes and approaches to life that we encountered and yet we all found fantastic comfort and release from yoga.

And as for the Tuscan hills, they became our playground… daily reminding us why it is we pull on our running shoes and do what we love. Each and every morning their contours challenged our determination and our bodies. We maybe surprised ourselves with our strength and power in tackling the endless rolling tracks a million miles away from life in the big smoke. I believe it was our renewed mindset that made these particular steep slopes so rewarding. Thanks to Erin, Julian and the company we kept, our weary brains hit pause on workaday worries and enjoyed a holiday of their own amid hours simply spent living with no-one to answer to and no dependency to serve. Sometimes escape is not a means of running away, it’s just a way of running in a new direction and that is exactly what it felt like. We simply engaged in an alternative form of training and got just the reboot we needed to tackle
our real lives in London with a renewed spring in our strides.

We returned with some new ideas for our dinner plates too. The rare culinary delights we sampled in Italy were another fabulous ingredient in the overall experience. When eating at the villa, in-house chef Oli served up the very freshest Italian cuisine cooked moments before serving. Vegetables picked from the garden were loaded up onto our plates next to homemade pasta, freshly baked bread and sumptuous salads. I must admit we were a little nervous that all dishes were vegetarian because we are unashamed meat lovers but the rich tastes and combinations soon won us over to the point that we barely noticed the lack of our staple chicken or beef. Perhaps it was that wine! The menu gave our dishes a new focus and our food a new form to match the flavor of the whole departure from our
norm.

The five days spent with EAT.PRAY.MOVE are certainly times we will not forget in a hurry. We knew that we were taking on something unique in our experience and that in itself can be a little difficult and daunting when you are supposed to be treating yourself to a break but there was never any sense of being pressured or pushed towards anything we didn’t want to do. Erin and Julian create an atmosphere and an ambiance that you grow into until it seems the most natural thing in your new world
to enjoy all aspects of it. We left not only refreshed and revitalised but also inspired by everything we tried and learnt. The biggest recommendation is that we arrived as sceptics and came home as converts.

And now for something completely different… next stop Iceland! 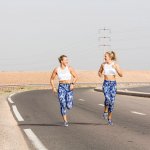 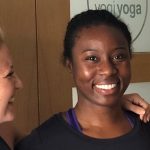 Moving wherever and whenever with MoveGBBlogs, Training