And that sums up about 90% of the responses received upon sharing our next feat with fellow friends, runners and family. Just when we make peace with the 62 miles (100km) we’ve signed up to run, the next recipient responds alarmed and shocked that we would even consider doing this for ‘enjoyment’.

Now, cards on the table, we signed up to this ultra thing a little in the dark. Don’t get us wrong, we have all the information at our fingertips, and rooms full of people who’ve conquered many a feat of this kind. The not knowing in this instance actually comes from ourselves. We were unsure of how we’d adapt to the training, or how our bodies would handle the mileage. We may run a lot, but this is a new game for us. To you, yes it may look like we’re always running, but in reality, for ‘runners’ we don’t run that much. Turns out, when you’re training to run for 12+ hours that’s got to change…

One thing we did know was how far it was. And how much time it would involve on our feet. With this in mind, the said time in the run-up must reflect the 12-14 hours expected.

on the 13th July. This means our usual Thursday sub 10km trot, becomes 20km with a plod both there and back. Races we enter now sit at a minimum of 13 miles, and even then there’s usually a run before or after. The 11th May was the real eye-opener, as with just a few days notice we signed up to run 44km, as part of the Dulux Revolution trail ‘marathon’.

The race is organised by racing wizards Threshold Sports. The same team who’ve coaxed us in to cover the 100km distance in July (and no doubt will have us for many more).  It’s a new addition to their repertoire, enticing all in by offering 3 distances; half marathon, marathon and ultra. It’s a flat course (mostly), beginning in Marlow, taking on a loop of the town before finishing up in Windsor. You may have heard of the race in line with its usual suspects, cyclists. The two wheeled chasers have the option to tackle a 300km course in either one or two days, finishing up in the same spot we did!

Nerves niggled, not really due to the race element as this was not about that. What got the butterflies dancing was the thought of tackling 44km off the back of a 60km week. This is almost unheard of for us! We knew our bodies could cover the distance, we’ve done it multiple times. The trick was the speed in which we had to do it… slower! Slower means more time on your feet, which ultimately means you tire at a not too dissimilar rate, just over a longer period of time. We were looking at adding a full hour onto our usual time goal, which when running can really take its toll. Your running style totally changes, and your usual efficient movement takes a whack sideways. We find we tend to adopt a bit of a shuffle which can be tough on the hips and calves. As well as this it encourages muscles to fire that usually don’t meaning, yep you guessed it, they tire quicker. Sound silly to worry over the option to go slower? Perhaps, but this is all new to us, and change can be scary, even it is within something you’re very comfortable with.

Lucky for us, the Threshold team organised the event to a tee. First up, the route is not pitched as one to race, it’s there as one to enjoy. Whilst yes, there were people racing, the majority were simply there for the miles making for a friendly and supportive atmosphere. The aid station volunteers were incredible, clapping you into every stop point and supporting every return to the route. The course was absolutely beautiful with at least 75% run on trail, and the finish offered hot drinks, good grub and even a suncream station!

So all in all, what we’d drummed up to be a pretty daunting situation turned out to be quite the opposite. We ran in good company, encouraged by coach Brad and Luke, who we trust above most others. Oh, and of course we had each other to support every stride, sing a song and stop off at the stations. By appreciating the controllables (company, course etc), we were able to approach the race with a positive mindset meaning the many miles suddenly seemed like just part of the process. A part that we hugely enjoyed, and look forward to returning to next year. 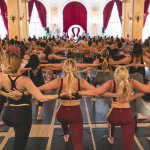 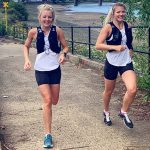 How to stay cool when Running?Blogs, Clothing, Reviews, Running