Tuesday is rarely the most exciting day of the week, is it? Pancakes on Shrove Tuesday… yummy! Stock market crashes on Black Tuesday… not so good! Special Tuesdays don’t come along too often, but last Tuesday just happened to be spent indulging in some of the best culinary delights I have ever enjoyed.

We were invited to the The Phene, a 19th century pub with a difference in the heart of Chelsea. On arrival we were greeted by a friendly waiter who showed us to our table in a chic but comfortable first floor dining room that was simply decorated and, in our case, complimented by two plush red chairs (perfect for the ‘food coma’ sprawl that would follow our supper).

Deciding what to choose from the appetising menu was the only chore of the evening. We were quite literally spoilt for choice. We eventually settled on a sharing platter, a sure way to try more of what was on offer without exploding before the mains. Good eating requires more than just a mouth and a stomach, you know! There should be a thought process, a plan. ‘The Angler’s Board’ consisted of salmon and pumpernickel bruschetta topped with a beetroot creme fraiche… scallops and chorizo soposatta… salt and pepper squid with devilled mayo… whitebait… and a rocket and fennel salad. Is your mouth watering yet? Ours were almost dribbling!

And what better subject to discuss between heavenly mouthfuls of our delicious starter than where to go with our mains? In addition to the many delectable options on The Phene menu, there is a top corner dedicated entirely to foods of a similar ‘whole’ nature. Their ‘Super Foods and Healthy Options’ section contains vibrant unprocessed food, unlike so many other menus that make false claims to healthiness and simply lack in nutrients. This was not the case here. We decided on the aubergine and sweet potato curry and the miso chicken with an edamame bean, coriander and goji berry salad and sticky rice. Both meals were packed full of essential nutrients and provided a balanced variety of goodness. Of course we ate half of each meal and switched, because not sharing is a recipe to losing your very best friend.

And, naturally, it would have been rude not to try pudding! Our decision was made in record time on this occasion because no sooner had the waiter poised his pencil than we simultaneously blurted ‘Oreo Cheesecake to share please’! There are no words to describe what soon arrived, and that is a first for us on a Tuesday night (or any given day or night!) I guess this dessert tasted how I imagine it would feel to find out your long last father was David Beckham.

No evening is complete without gin (come on, confess!). Here at The Phene they have an epic cocktail menu, along with a section devoted just to offering a different gin concoction for each month of the year. We had the January gin (pomegranate and cinnamon) as it is the month of one of our birthdays and the April gin (violet and mint) because it simply sounded delicious. Who needs an excuse?

The service was impeccable all evening. Too many waiters leave you feeling a little invaded and pressured. No one likes a waiter who lingers. Er… table for TWO actually! Here, the waiters were polite and patient despite our annoying indecisiveness and we cannot wait to test both again soon! After all there are twelve months of gin in a year! 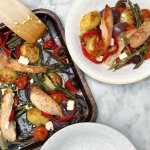 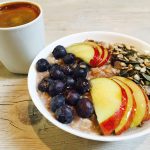