They need to be different, to have different definitions of ‘achievable’ and ‘possible’ and ‘in reach’ to us mere mortals. They maybe need a healthy dose of madness too.

Life is a constant assessment of what we can and can’t do. Life itself depends on our ability to judge whether we can cross the road before that huge juggernaut roars by or stroke that dog without it biting our hand off. We attain that judgment through experience. Experience prepares us for the next choice. We quite literally learn from experience. We develop an in-built resistance to risk through the guidance of our parents and teachers. Human nature and self preservation instincts usually counsel us against sitting on balcony railings on the 23rd floor with our legs dangling over. Endurance athletes tend not to do that either. They are not quite that mad.

Endurance athletes like to push themselves but not over the edge. They like to test their bodies and souls but the good ones only take on what they have trained and prepared for. They assume their title through hours of sweat and toil, hours of battling against their bodies’ guilty pleasures and hours of commitment to their sport. We cannot necessarily match their feats but we can be inspired, pushed and motivated by these champions. It was uplifting to be in their company last weekend, to share their passion for competition and their love of challenge.

Cortina Skyrace saw us cover 21k and climb 1000ft up and around the Dolomites. We were members of a 350-strong club, all hungry for the endorphins and adrenaline that flow freely during such an experience. Em and I were by no means the strongest or the fittest but when we stood on that start line, we were welcomed into a community of totally like-minded competitors. We were not in it together for the same times or targets but we were all in the field for the same reasons.
When we hiked the Canyon, we hiked it alone. We did it purely for our own satisfaction and during those 7 hours on the trail no one else really mattered. This was different, this was like being part of a team and we couldn’t help but care about and be inspired by every other individual that turned up ready to race.

The countdown quickened the pulse and before we knew it we were on the way. As with all things in life, there are good days and there are bad days. It’s definitely like that with races. Unfortunately, H suffered a bad race from almost the first stride. But as we’ve said before the mental battle is as important as the physical one. On this given day, on this particular mountain, H would be relying on brain power (and the occasional butt push from E) to keep one foot striding out in front of the other. Luckily, E felt strong and this kept TTH together even when the climb became steep and H became weary and worried.

As the miles decreased, so the gradient increased but when in the company of so many with the same attitude, each individual supports those around them so that the group can stay positive. It’s a difficult sense of security to find words to describe but we felt incredibly lucky to feel included in such an unforgettable communal experience. Even though we were more than happy to be sat in the middle pack we did think about those elite runners up ahead and their redefining of those phrases like ‘probably unachievable’, ‘possibly out of reach’ or ‘humanly impossible’ through their dedication to pushing back barriers. If they are indeed a little mad, there is a lot of method in their madness. They are not gamblers or daredevils, they plan detailed strategies and follow carefully mapped programmes to establish their ability to lead the way. They set the high bar that we look up to. We were proud to be treading in their footsteps.

From halfway, it was all downhill and that was particularly welcome news for H. Gravity is a great thing when you are on the way down. We ran a comparatively comfortable second half, cheered on by the locals and driven on by those in the race bibs around us. Before we knew it, we hit the 15k water stop and knew there was just a short distance to the line and another tick alongside another challenge. H even began to enjoy it. The scenery was like nothing we ever imagined and, even though we had to watch our step on the uneven paths, we couldn’t help but gaze at the gorgeous vista as we paced through fields and besides a stream. The tight joints eased and the pounding hearts quietened as we drew closer to the town of Cortina. The last 2km felt decidedly strong as we found more even ground and firm concrete paths that led us speedily to the applause on the finishing line (and a large pizza and an ice cold beer). All distant memories of struggle and all those shots of pain soon disappeared as we ran into the embraces of the North Face team, buzzing with pride in ourselves and for every single runner in the race.

The town lit up and all of those heady feelings we experienced back on the start line took over once more. We were thrilled to have been given the rare opportunity not only to run our first mountain race, but also to have been accepted into a community that understands and embraces challenge. The leaders of this community show the rest of us the way to make the impossible possible, the unachievable achievable and to touch the out of reach. They may perform at a different level to TTH but we can share their sense of ambition and focus by being in their company. No sooner had we crossed the finish line than both E and H were sharing one thought… what’s next? 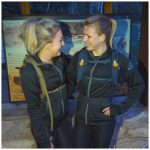 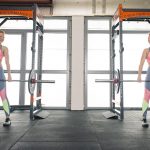