When you are setting an alarm for 4.30am, you had better have a very good reason. When the temperature is below freezing and the altitude is above 8,000 feet, you maybe need a quick sanity check as an alarm tone. But sometime before dawn, somewhere a mile and a half above the Colorado River is where we found ourselves on the morning of the Sunday 29th May. By choice and with a very good reason!

We like a challenge but… we knew this one would take us a good way beyond our comfort zone… about 10 kilometres beyond it as the challenge turned out to be a little longer and tougher than schedule. If it hadn’t been for the heady cocktail of endorphins and terror-infused excitement that had been dancing around in our dreams, I’m not sure either one of us would have sprung out of bed with quite the enthusiasm that we did. Thankfully, we get a kick out of competing with the unknown and, as hard as the Canyon tried to spook us with its dark morning call, the bitter chill and the eerie silence stood no chance of putting us off.

Silly smiles in places, we eventually mustered up the courage to leave the snug warmth of our car and bid farewell to friend and chauffeur Mollie. It was all a little more emotional than planned but reality was about to be suspended for a few hours so a little bit of human emotion was a good thing to breathe in before we set off. There was no turning back now and so the flow of a few tears and the heartfelt farewells were a reminder that we needed to get our game faces on for what was to come.

We quickly found our competition mode, turned on our Adidas-clad heels and headed for the hills… or in this case, the valley. Descending deep into the Canyon is an experience like no other. Quickly we became one with our surroundings, forgetting the enormity of the challenge we had accepted and instead tackling it one careful, concentrated step at a time. The dive down towards the bottom of the planet can only be compared to a feeling of being submerged in deep water as we allowed ourselves to be swallowed by the stunning stillness and serenity.

Spirits high and legs still fresh we zig zagged down the North Rim Kaibab trail until we were greeted by the sight and sounds of the racing Colorado river. Inviting as the idea of a cooling dip may have been, we resisted a splash in its waters and continued with a strong 8 to 10-minute mile pace. Looking back, it’s difficult to believe just how strong we felt at this point and particularly how this strength stayed with us through to the 40 kilometre mark. Adrenalin is a powerful drug.

The Canyon both inspired and uplifted us, banishing any thoughts of tiredness and plotting a most beautiful path for us. We meandered beside the river bed, following the rushing waters for around 20km before arriving at Bright Angel campsite. Here we stopped to snack up, sit down and take in the majesty of the backdrop. Carbs bars consumed, legs lengthened and a few stern words to ourselves later, we were back in rhythm and on track.

This was where the real fun began as the steps were asked to lengthen and test the endurance of our weary lower bodies. With a 4,500ft climb before us, this was mind over matter time. We set off up the questionably-named Bright Angel Trail heading for the South Rim where PB&J sandwiches were practically screaming out our names from the summit. Where once there was a sturdy rocky path, now there was soft red sand. The knees were saying thank you but the calves were shouting out all kinds of expletives. The pace was simply unsustainable. We’d settled into a slower jog now only for a trying 300ft climb to give way to a sudden drop down. Snakes and ladders… thankfully without any sightings of the rattlers that we’d been warned about. What goes down has got to go up again in this landscape and we regained the lost ground without complaint. How could we complain when every time we lifted our throbbing heads from the track below our pounding feet, we beheld the wonder of this miracle of nature. As the sun began to show its face, gleaming off the red rocks we could only fall to our knees and feel like specks on this awesome giant stage. If the run didn’t take our breath away, the unimaginable views certainly would. We felt privileged, humble, overwhelmed.

All of this romance and splendour was soon hit square on the jaw as we collided with the infamous ‘runners wall’. Three miles out, in 30-degree heat and faced by eternal uphill climb, we slowed almost to a stop. There was no disgrace in letting our faithful feet do some walking. No surrender, no loss of willpower, the power was still switched on as we lengthened our strides to fight the contours and ensure we kept eating up the yards. Each mile and a half rest house seemed to be further from the last one but we continued to move in the direction of the sky and the last switch back was greeted with a mumbled cheer. Nearly there. Its yellow scar slashed the deep red rock and suddenly our fading legs found new fuel and our breath returned for the final push. Revived, we picked up the pace, striding towards the edge of the rim we had been looking up at for so long. This was the equivalent of the jog down the Mall at the end of the London Marathon. This was the victory lap and, in just under 7 hours, we had conquered the Grand Canyon rim to rim. 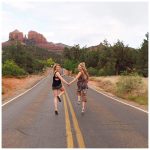 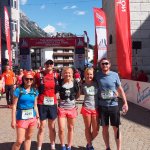