It seems there’s been a surge in Turbo Trainer purchases, which has left us feeling very lucky that we ordered ours moments before shops everywhere seemed to sell out. And that’s not the only thing we’re feeling lucky for. This small(ish) device that now lives in our spare bedroom has been the answer to all our prayers this lockdown, providing us with an opportunity to train the way we love and stay motivated for whatever races may come of this year. Lots of you have been messaging us about which turbo we traded our hard-earned money in for, so here it is, our review of the kit that’s kept us ticking over in lockdown.

Honestly? We were a little led by price. The next one up asks for an extra £200 and other than the increased wattage you could hit, there weren’t many differences that we felt would really affect us. The Kickr Snap is the lightest of all the trainers, and also the easiest to switch out bikes when you’re sharing the trainer with someone taller, say you’re two boyfriends (one each).

To be honest, everything. It’s super easy to use and connects to all our attachments without too much trouble. In the least superficial way possible, it also looks nice. It’s sat in our spare room, which also doubles as an office but it doesn’t take up too much room and isn’t at all offensive to the eye.

It was super easy to set up, even H managed to do it!

What we haven’t loved so much?

It occasionally glitches, which we were warned about when considering this one and the step up. It’s probably happened twice in the hundreds of times we’ve used it, so not something we’re too worried about.

The other thing to mention is other expenses that we hadn’t considered but we cover that below.

Things to know before you buy

If you’re using your road bike on the trainer, it’s advised you buy a separate tyre to stop it burning out your bike wheel. We got our tyre off Amazon for £50. It sits on Rob’s (E’s boyfriend’s) back wheel since we both have tubeless tyres. If you are riding inside and outside often you will not want to keep changing your tyre, so you may want to purchase a spare back wheel (around £60) and a rear gear set to fit to it (around £45).

The turbo doesn’t track cadence, which is not essential at all. Saying that, for many of our workouts it’s a useful stat to have and so we purchased a Garmin cadence sensor from Sigma Sports for just £35. This connects easily to the turbo via Bluetooth.

Zwift is an additional cost, but definitely worth getting if you’re training for something specific. It costs £13.99 a month and allows you to ride with friends and link to platforms such as Training Peaks to allow your coaches to plug your sessions in and use the turbo to match outside/ideal conditions.

Put a mat and a towel down before you set up to prevent any oil/grease/sweat marks on your floor.

Many are sold out right now, but Zwift is taking orders and it looks like turbos will be back in stock around May. Whilst yes, these are expensive, if cycling is something you love, or if you’ve still got a race in mind we’d say they’re worth the cost. The cost per use ratio is definitely a positive one, and hey if you’ve got a housemate who’s equally as mad, why not split it? 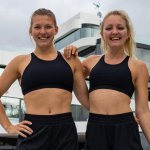 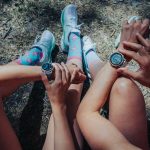